Federal Reserve Chairman Jerome Powell will serve a second term after the Senate approved his reelection.

Powell faced two crises in his first term as Fed chairman, 1) the COVID-19 pandemic, & 2) decades-high inflation. Critics of Powell argue the Fed was a few months too late in raising interest rates & decreasing its balance sheet.

He added that achieving price stability will likely come with some pain to the economy, hinting that a so-called “soft-landing” might be out of the cards.

With the high demand for workers, wages are increasing (but not as much as inflation). According to Powell, there are currently two job openings for every unemployed person.

The trick here is to raise rates just enough to tame inflation but not significantly increase the unemployment rate. When interest rates rise, borrowing gets more expensive & consumer spending/demand declines. This could lead to employers having to lay off workers to cut-down costs.

McDonald’s got itself a buyer🍟

Musk-Twitter deal not on hold🟢

Apple could soon debut its first new product since 2015🧮

Tesla gets kicked out of the S&P’s ESG index👢

No Result
View All Result

Disclaimer: Thndr does not provide investment advice, individual investors are responsible for their own decisions or can seek independent advice. The value of investments can go up and down. Thndr is a trading name of Thndr Securities Brokerage which is authorised and regulated by the Financial Regulatory Authority (FRA). Registered in Egypt (no. 804)..© Thndr. All rights reserved 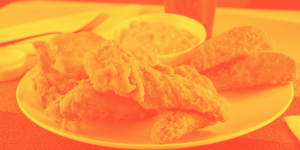 So, you’ve decided to become a Thndr Thinker💭 Let’s go through some housekeeping notes before you jump into showcasing your article to all Thndr Claps readers!

Generally, here’s what we look for in deciding whether or not to publish an article🧐

If you have any additional questions about becoming a Thndr Thinker💭, please email thndrclaps@thndr.app and we’d be happy to assist you.

Normally, your article will be published within 24 hours of submission or returned to you with editorial feedback.